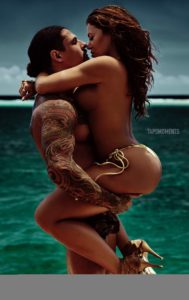 “It’s great to be on Vivid Radio, we look forward to meeting the sexually powerful Christy Canyon and her fans will have a chance to talk to us live,” says Toochi Kash.

Ash Armand, best known for the reality show Gigolos on Showtime is part owner of Lexotica Entertainment.  Ash’s sexual fitness expertise is rooted in massage therapies, natural healing modalities, physical training, studies in human sexuality and healthy diets, learned in Japan, India and the USA. He is an avid global traveler.  His personal practice includes daily, rigorous, physical training, mindfulness and a balanced diet. He is a dedicated father and family man.  He debuted five years ago in Gigolos to share his deep passion for connected sexuality with the world. With Lexotica Entertainment, through exquisite cinematography, Ash Armand brings to the mainstream his unique take on ecstatic, attentive, passionately-connected sex.

Toochi Kash is an internationally published model and internet celebrity. The beautiful entrepreneur is involved in real estate deals, an app called Iconlinks and is part owner of Lexotica entertainment. She has been on the cover of Maxim, FHM and many more widely published magazines. She is an avid global traveler who has more stamps in her passport then 99% of the population. Lexotica is a passion project for her to celebrate the beauty of sexuality and bring a positive light to erotica. She is determined to bring a female perspective to porn where the women’s beauty, desires and fantasy will be brought to film.