Adult filmmaker Harry Sparks is getting back to his roots with the release of two mainstream horror movies, All Hallow’s Eve and Rotkäppchen: The Blood of Red Riding Hood. Both movies were recently screened and had a red carpet premiere at the AFI Silver Theater in Downtown Silver Spring, Maryland, just north of Washington, D.C. 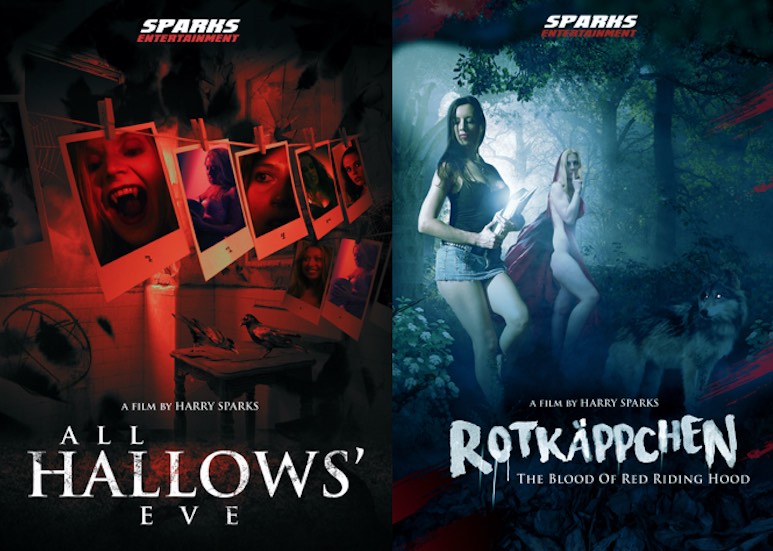 All Hallow’s Eve is a horror anthology about a group of young friends getting together to tell one extremely twisted stories on Halloween night. The film stars some of the most talented actors in the horror and Indie genres including Stuart DeMattia, Colleen Stein, Serena Lorien, Bryan Sullivan,

Rotkäppchen: The Blood of Red Riding Hood proves that not all fairy tales are for children. The classic fairytale has been modernized and is now erotic horror. The plot revolves around a German teenager who withdraws from a difficult school life and finds comfort in fairy tales and the power of imagination. Shot on location in Germany, Italy, Austria, Switzerland and the United States, Rotkäppchen: The Blood of Red Riding Hood has both adult and mainstream stars in the film. Sativa Verte previously was featured in Sparks’ Revenge of the Petites. Kerri Taylor has done some nude modeling. Angelina Leigh is a former Playboy Model. And, Faith Lee Sentz and Chis O’Brock both had roles in Sparks’ critically acclaimed The Vampire Mistress. On the mainstream side, Debbie D has done several horror movies and joins the talented cast of Stefanie Geils, Nicole Leigh Vuono, Phil Gibson, Savannah Costello, Sheena Norris, and Natalia Menocal.

“I’m glad to return to my horror movie roots and have written and directed both of these titles,” said Harry Sparks. “I was also elated to be able to being adult stars into a mainstream production. They all worked together seamlessly, and you will definitely see more adult stars in my upcoming horror releases.”

To interview Harry Sparks for your site, publication or show, contact Erika Icon of The Rub PR at erika@therubpr.com.