Multi-award winning TS performer Aubrey Kate graces the cover and center spread of Transformation Magazine’s current issue #101 released earlier this week. This is her first magazine cover since winning at all three major adult award shows this past year. This Kate’s second time being featured as the magazine’s highly coveted cover model. 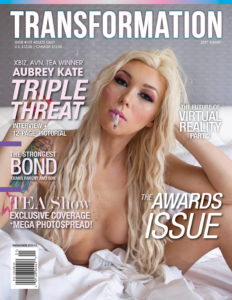 “Wow, where do I even begin? I wasn’t expecting to win, let alone received accolades from all three major adult award shows this year,” said Aubrey Kate. “I am so happy to be on the cover because my biggest dream was to be in Playboy. What really makes me smile is modeling.  Acting is fun, but I’ve always had dreams of being a full-time model.”

“Who else but Aubrey Kate to be the cover model on the issue of Transformation? For us, this was a no-brainer,” said Steven Grooby.  “She’s won all the awards (including being the cover girl on the multi-award winning ‘Real Fucking Girls’), she’s amazing on camera, a stunning model, and the most professional performer I’ve ever worked on a trans production with. She’s a star and she’s a true cover model.”

Transformation #101, which marks Grooby’s first issue since handling its editorial content, features triple threat Aubrey Kate on the cover, as well as an in-depth personal interview with Steven Grooby, and stunning spread and photo feature spread shot by Isabel Dresler.

Purchase your copy of Transformation Magazine at CenturianOnline.com.

Media inquiries can be directed to kristelpenn@ikigaimarketing.com.