Yanks.com Announces Olive Glass as its Girl of the Month for May 2017

Yanks.com, the 100% female-produced amateur erotica content site has named Olive Glass as its reigning Girl of the Month for May 2017.

“We are so proud to present Olive Glass as our Yanks.com Girl of the Month for May,” said Yanks.com CEO and co-founder Billie Miller, who runs the adults-only operation with partner and CMO Todd Spaits. 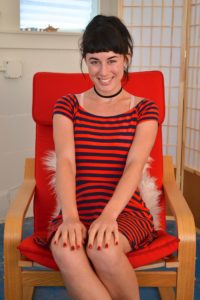 “Wow, thank you so much for making me the model of the month!” said Glass, who has already starred in 28 sizzling solo and all-girl Sapphic scenes for the company since her July debut. “It’s always a delight to work with Lily Campbell and I couldn’t be more happy to represent Billie, Todd and the whole Yanks team. And to all the viewers as well, you’re amazing.”

Each month, Yanks.com showcases a new starlet who embodies the company’s philosophy of ‘Real Girls – Real Orgasms’, and also stands out as an exceptional on-camera entertainer that’s popular with Yanks.com members.

“Olive is gorgeous and she plays to the camera in a completely effortless way that our viewers have clearly responded to,” said Miller, who added that “her enthusiasm, fun attitude and star quality makes Olive one to watch this year.”