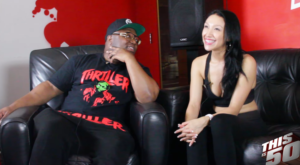 Vicki Chase has forged her way as the hottest Latina to hit the Adult Scene in decades with her all natural 5’.4’’ stature & sexy 34C-24-36 physique. Vicki has been Nominated for over 20 Awards, won (2) AVN Awards, an XBIZ Award, (7) XRCO Awards, has starred in over 300 featured adult films, from Solo, to G/G, to GangBang, (to name a few). Currently she is running the gamete on social media outlets, such as OnlyFans, ManyVids, Skype Shows, CamSoda, while bringing in an increasing 104k+ followers on Twitter /@VickiChase and over 149k followers on Instagram /@VickiChase, she surely shows no sign of losing steam. Be sure to check out all of Vicki’s future adventures at her website at VickiChaseShop.com.